TRAVEN Technology was created in 1997, as a spin-off for the activities of the major industrial group ZF NACAM, leader in the market of mass-produced steering columns.

Today, the Saint-Amand-Longpré (41) production site has a surface area of 3,500 m² for its industrial and commercial activity.

After starting out with the manufacture of steering columns for vehicles that do not require a driver’s licence and transmissions for industrial applications, TRAVEN Technology developed into professional vehicles and enthusiastic sportscars sectors.

After a period of steady growth, the 2008-2009 economic crisis forced us to change our organisation.

New governance was set up in June 2010, along with a restructuring of the industrial model on the principles of LEAN Management:

– Production according to customer needs

Today, TRAVEN Technology produces no less than 800 active references, in series of 25 to 25,000 units a year, for 150 customers, guaranteeing the same degree of excellence.

Take a look to our innovative product. Thanks to our know-how in the top class automotive industry for steering column with electric adjustment, we can offer to off-road equipment the most advanced ergonomic solutions.

You can see all the processes used in-house. From raw material (shafts, tubes, steel plates, aluminium castings,…) we manufacture each component involved in the assembly of our steering columns and steering racks. These safety parts meet current regulations, but also meet your requirements for bespoke steering systems, From Wheel to Wheels. 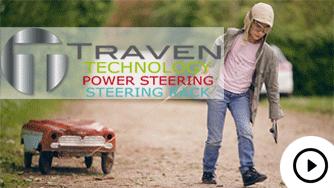